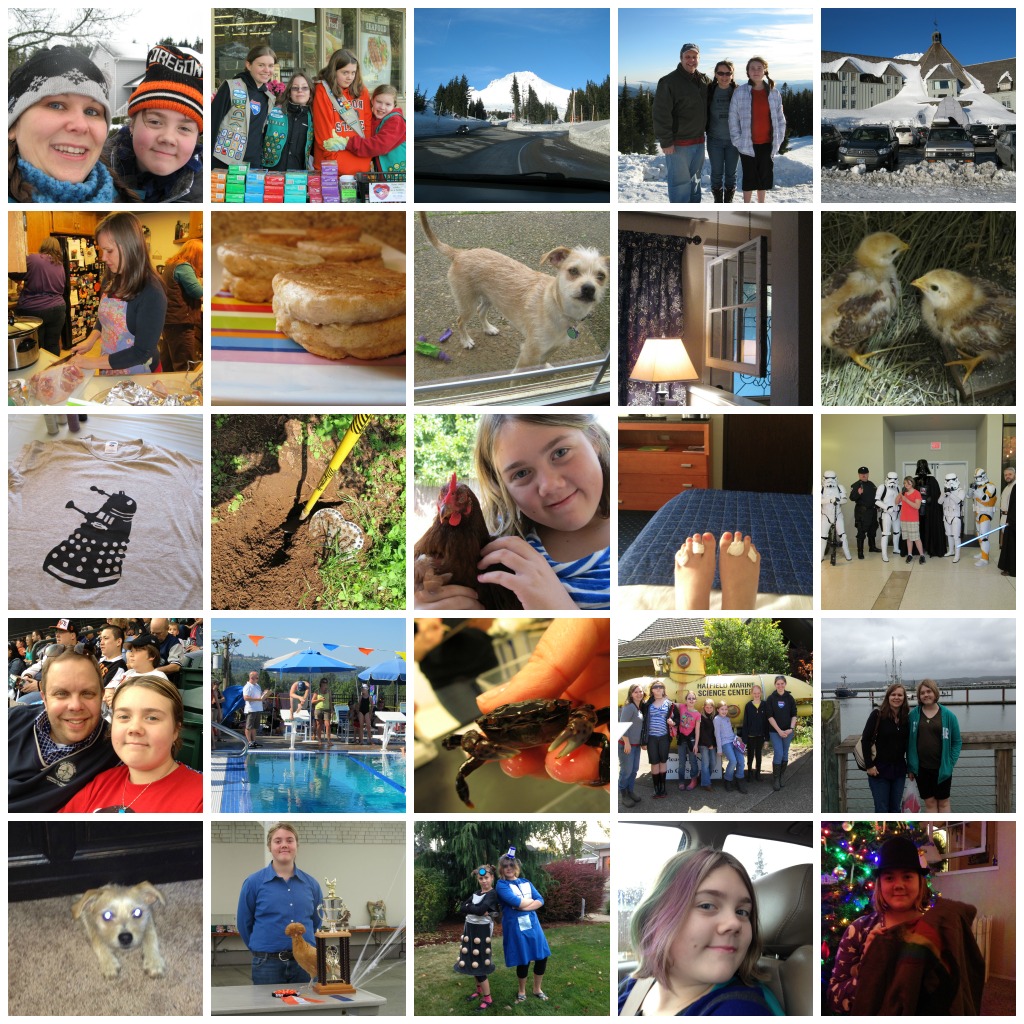 I love looking back on the year’s photos, trying to decide which ones can accurately sum up my family’s experience. Some shots, like the things they represent, are fairly universal: trips we’ve taken, achievements, and milestones. Others are uniquely ours, like the time our new dog tried to dig up our old dog. I hope you enjoy looking back with me.

Note: If you are interested in stats, my all time highest viewed post is An Enchanting Garden with 54,734 pageviews. Originally posted in September 2009.

*Ahem* Please Prepare for a Teeny-Tiny Announcement
A short but sweet post where I announced signing with my agent–certainly a highlight this year.
Homemade Magic Shell Ice Cream Topping
If you only knew how many times I have made this–for Walt and Newt, of course.
In Which We Explore Heidi’s Fear of Dolls (And Giraffes)
A fairly new post, but a fun one. I am capable of being amused by my own misery and horror.
Secret Doctor Who Bedroom Makeover
I love the video showing Newt’s reaction to her room makeover. As the mother of a tween, home-runs are few and far between. This one sailed right out of the park.
Winter’s End
A more serious post from last January, but it absolutely deserves its place on this list. 2011 was painful in many ways that I was unable or unwilling to share publicly. In this post, I talk about depression, hope, and healing. Nearly a year later, I’m happy to state that, well, I’m happy.

Five Books I Liked A Lot

I really do have a hard time picking favorites in any category. I’m too changable and what I really love is variety. If you were to ask me for my top five next week, this list might be different. However, these were certainly books that I read and loved in 2012.

Before this year, I’ve never tried to keep track of how many books I read. A friend suggested we set reading goals in 2012. I picked 60 books, but blew past that in July. I finished the year with having read 91 books (manuscripts included).
The first book I read this year was Why Women Need Fat: How “Healthy” Food Makes Us Gain Excess Weight and the Surprising Solution to Losing It Forever

(a compensated review from BlogHer Book Club). As of this writing it looks like the last book of the year will be Leaving the Bellweathers

I’ve stated this before, but I don’t really do New Year’s resolutions. If I need to make a change, I change it. If I want to set a goal, I set it. January 1st holds no magic to guarantee success. If anything, the opposite is true.
However, I will make a prediction:
I expect my 2013 will be extraordinary in every sense of the word.
I hope yours is too.

Note: I am using Amazon affiliate links, but I’d really prefer you buy books from your local bookseller. They would prefer that too.