one
I just returned from a bookish road trip with Robin Herrera, Miriam Forster, and our intern/my daughter, Hannah. We drove to Boise and did writerly things with YA author Sarah Tregay.
It was snowy and cold outside but the people were so incredibly warm. I’ll blog more about it next week. In the meantime, if you are in the area, go visit Rediscovered Books and tell them I said hi!

two
I took Hannah to the dentist today and the hygienist said, “I’m so excited for next week, aren’t you?”
I said, “What’s next week?” and she gave me such a look of incredulity before reminding me that next week is Thanksgiving.
I’ve been busy, okay?

three
I’ve finished 50% of of my Christmas shopping. Three gifts have already been wrapped. My cards are ordered.

three-point-five
I know that kind of get-it-doneness is annoying, but there is a reason for it.

three-point-six-seven
I want to get holiday prep finished early because in mid-December I am having surgery. Longtime blog readers may recognize this little fellow: 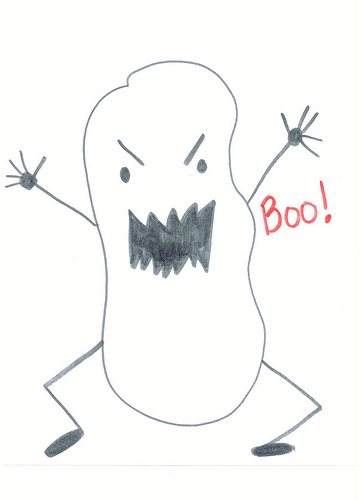 That is a poorly illustrated drawing of an ovarian cyst. He and his friends have plagued me off and on for years. It’s been irritating, but manageable. However, last year, a bigger, meaner set of jerks moved in. (Hello, fibroids. I hate you.) My doctor has advised we just go ahead and remove all the affected parts, and since I’m not using them, I agreed. I’ll be having a hysterectomy.
Please feel free to tell me surgery horror stories.

three-point-seven-five
Three is taking up a lot of space.

three-point-nine-nine-three
I’ll be buying new pajamas and plan to be in, on, or near my bed for most of December. Perhaps I’ll catch up on my reading list? (Hahaha! If only.)

four
This has nothing to do with three. And it delights me.