Right now school is a miserable place for you. I know how you dread the bus every morning. How you get made fun of when you have to take a day off from school for allergy tests and come back looking like you were bitten by a geometrically-inclined mosquito. How even recess has lost its fun now that that group of girls taunts you every day, telling you you’re fat and ugly (by the way, you’re not. And you’ll grow out of this awkward phase—mostly—I promise.) 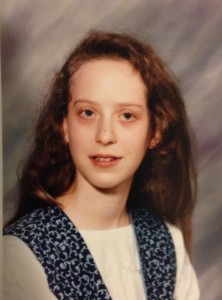 You may not realize it now, but you’re lucky because you have friends who are awesome and will be your friends for many years (even if you fight more often than you like). You share a love of books, and act out your own stories in the Redwall world at recess as way to escape the bullies. Maybe those bullies mock you for it, but some day, you’ll write your own novels. You won’t know what they’re doing, and you won’t care either.

The bad news: Before it gets better, it’s going to get worse. As hard as 5th and 6th grade have been, junior high is going to be harder. Then there will be high school. That’s where you learn to embrace your weird…unfortunately, not everyone else does. I know you worry that no one cares about you, but trust me—they do. The bright side of high school is that you collect a few more longtime friends along the way.

Now the good news: Someday you’ll go to a college where you’re not the weirdest or geekiest person in the room. And they won’t give you grades. Sounds like heaven, right? It is, and it’s how you got the courage to tackle a novel in the first place. You’ll meet people who challenge you in all the best ways, and inspire your creative side. It is glorious. It is life changing. I promise it is worth getting through what must seem like an infinite stretch of public school before you.

So, keep reading late into the night even after mom and dad yell at you to go to sleep. It’s okay to need an escape. Books are a healthy way to do that! And when you do go to bed, keep telling yourself stories as you fall asleep (though, you might want to whisper more quietly – your sister in the next room can hear you!). Keep creating, and most importantly keep dreaming. One day when you get to hold your own fantasy novel in your hands, you’ll know it’s all worth it.

Monstrous will release on February 10th. Find it on IndieBound, B&N, Amazon, or order a signed copy from Porter Square Books by typing “signed” in the order comments. 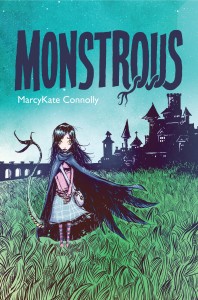 The city of Bryre suffers under the magic of an evil wizard. Because of his curse, girls sicken and disappear without a trace, and Bryre’s inhabitants live in fear. No one is allowed outside after dark.
Yet night is the only time that Kymera can enter this dangerous city, for she must not be seen by humans. Her father says they would not understand her wings, the bolts in her neck, or her spiky tail—they would kill her. They would not understand that she was created for a purpose: to rescue the girls of Bryre.
Despite her caution, a boy named Ren sees Kym and begins to leave a perfect red rose for her every evening. As they become friends, Kym learns that Ren knows about the missing girls, the wizard, and the evil magic that haunts Bryre.

And what he knows will change Kym’s life.

Reminiscent of Frankenstein and the tales of the Brothers Grimm, this debut novel by MarcyKate Connolly stands out as a compelling, original story that has the feel of a classic.