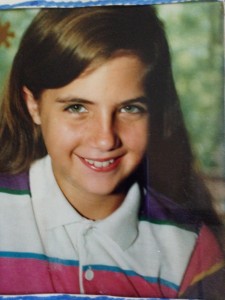 Remember how in kindergarten, you ran into that playground pole? You were running flat out. Then – DING – it was like someone rang a giant bell. The goose egg on your forehead was so big the school called your mom because they were afraid something was seriously, medically wrong with you. Then, in first grade, you were staring at your feet while walking with your class from lunch and – DING – you smacked into that pole that held up the canopy. There was another goose egg. Another call to your mom.

Well, the good news about being eight is you will no longer run into poles.

Okay, yes, there’ll be more goose eggs. There will be the time when you and your older brother are playing. He’s spinning you around like a whirling dervish by holding your arm and leg. (Your little sister is watching – not her turn.) He loses control, you knock your forehead on the tabletop, and you and your siblings panic the babysitter. This is fairly impressive as you only have a babysitter about three times in your entire childhood, and manage a possible medical emergency with one of them.

Even now you sometimes run into things – counter, desk, rocking chair – any type of furniture really. Just the other day you managed to hit your head on the driver’s side door of your Subaru. You’re slightly taller than the car, so you’re not sure how that happened. But despite all that, between eight and thirty-something years of age, I can assure you, you haven’t dinged your head on another pole even once.

The point being, it takes you awhile, but you do get better at looking at where you’re going.

When I decided to write to you, I considered telling you specifics about things that will happen – good and bad, hopeful and depressing – then I realized that at eight you’ve only recently stopped looking at book’s endings before you decide if you want to read them. I don’t want to make you backslide by tempting you with any more life spoilers.
(Although, I do wish you’d be less mortified and more excited when your dad shows up in a gorilla costume to take you to your Diane Fossey report. Yes, that does happen. And, no, he doesn’t warn you beforehand. He wants to surprise you. So try to be happy. The only one who doesn’t realize immediately that gorilla is hilarious is twelve-year-old you.)

Okay. That was one more spoiler. But no more!

Instead, I decided to talk with you about poles, and knocks, and looking at where you’re going and where you’ve been. Know that some of the things that are hard for you now – showing people your writing, talking in front of people, new social situations – will be challenging for some time. In fact, I don’t think they’ll ever be easy.

And although sometimes it’s a disaster, most times it’s not. Eventually, many people are shocked these things are challenging for you.

So expect years of comedy (and sadly some tragedy), keep a lookout for poles, and realize if you do get dinged, most times it just hurts for a moment. After the swelling goes down, it’ll become another hilarious tale. Just write it down and make it part of the story. 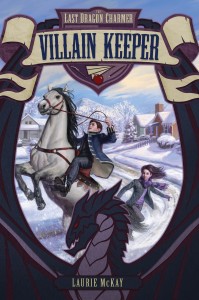 Find Villain Keeper on Indiebound, Barnes & Noble, Amazon, HarperCollins, or ask for it in bookstores and libraries near you.

All his life, Prince Caden has dreamed of slaying a dragon. But before he has the chance, he is ripped from his home in the Great Winterlands of Razzon and finds himself in Asheville, North Carolina—a land with no magic and no dragons.

Or so he thinks. The longer Caden spends in Asheville, the more he comes to realize that there is unexpected and dangerous magic in this strange land. There just may be dragons here, too. But what if Caden’s destiny isn’t to slay a dragon, after all?