This is you, writing from the future where TVs are larger than your Kirk Cameron poster but only as thick as a Nancy Drew book, and there are little boxes that you hold in your hand to change the channels, and there are tiny, flat phones that fit in your pocket and have no curly cords to attach them to the wall. I am not even joking here.

The future is magical.

So, it’s almost your eleventh birthday and you are over the moon because you just received a letter from the author James Howe who wrote some of your favorite books like Bunnicula, The Celery Stalks at Midnight, and Howliday Inn. I know, I know–James Howe! You will still find this event as mind-blowing thirty years in the future as you do right now. And that advice he gives you? It’s great writing advice and you will internalize it and apply it without even realizing you’ve done so.

Eventually his letter is going to get filed away in a scrapbook and you will forget about it for a while as you get caught up with dance and your aspirations to be a Laker Girl or backup performer for Janet Jackson. As you pursue those dancing dreams, you will also rediscover your love for writing and stories, and that passion will ultimately triumph over everything else and point you with purpose and focus into your future.

And then one day you’ll be living in Colorado (yes, you really do move out of California in the future. I know, you can’t imagine living anywhere else right now–except maybe Stoneybrook, CT, with the rest of the girls in The Babysitter’s Club–but you will move and you will be happy about it.) While sorting through your childhood things in Colorado, you will rediscover the letter from James Howe, and this will happen during a stretch of time when you are working multiple jobs while trying to write a novel. During this period you often doubt whether you have it in you to be a children’s book author like you dream of becoming. Finding that letter will feel like your destiny has been revealed, and you will plunge forward with confidence. Which doesn’t mean the path suddenly becomes clear and easy, but you will feel content with your choice to be on the path, no matter what obstacles lay ahead.

A few things I want to tell you before I get to the questions I know you are most eager for me to answer:

Okay, now the stuff you really want to know about:

1. There is going to be a sequel to The Egypt Game by Zilpha Keatley Snyder, but you will have to wait a while. Like ten or so more years. (Oh, and if the James Howe letter is tripping you out, get this: One day you will talk to Zilpha Keatley Snyder ON THE PHONE. You also eat lunch next to Lois Lowry. I know. I know!!! I told you, the future is magical.)

2. Your collection of VHS tapes with dutifully recorded and saved episodes of 21 Jump Street, ALF, and Moonlighting are not going to come in as handy as you think they will.

3. I’m sorry to break this to you, but you are not going to marry Corey Haim. You’ll ending up marrying . . . well, I don’t want to spoil it for you. But trust me, it’s a very happy outcome.

4. You won’t transform into an extroverted, chatty person, but that’s okay. It really, really is. All those things about yourself that make you feel awkward and like you don’t fit in? You’ll end up embracing them and appreciating your own individuality.

Okay, you can get back to your game of Super Mario Bros. now. And happy birthday, kid! 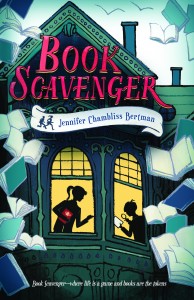 For twelve-year-old Emily, the best thing about moving to San Francisco is that it’s the home city of her literary idol: Garrison Griswold, book publisher and creator of the online sensation Book Scavenger (a game where books are hidden in cities all over the country and clues to find them are revealed through puzzles). Upon her arrival, however, Emily learns that Griswold has been attacked and is now in a coma, and no one knows anything about the epic new game he had been poised to launch. Then Emily and her new friend James discover an odd book, which they come to believe is from Griswold himself, and might contain the only copy of his mysterious new game.

Racing against time, Emily and James rush from clue to clue, desperate to figure out the secret at the heart of Griswold’s new game–before those who attacked Griswold come after them too.

To learn more or play the game in real life, visit bookscavenger.com.

Find Book Scavenger on IndieBound, Amazon, B & N, Tattered Cover, or ask for it in bookstores and libraries near you.