The bad news? Things are kind of crappy right now. Your parents are on the verge of divorce, your best friend has a new best friend, and your hair is a disaster.

But you do have to get through the next few years, and that’s why I’m here. I’d like to give you some advice that I think might help. Ready?

2. It will be okay when your parents get divorced. Not only will you survive, you’ll actually be happier. Your parents will be happier. You’ll love your new step-parents even though it will be weird at first. Just hang in there, okay? And maybe stop with the light-switch tapping. It’s exhausting.

3. You don’t need one best friend. I know you think you do, because that’s what everyone thinks in middle school, but during the course of your life you’ll have many different friends. Some will be the friends you have deep conversations with, some will be the friends you have fun with, and the best kind will be a combination of both. Just because your BFF is bonded with someone else doesn’t mean you’re not worthy of being a friend. You happen to be a really, really good friend, and even as an adult, your friendships will be priceless to you.

4. You feel like you’ll have braces FOREVER, but it’s only three years. And when you get older, it will have been worth all those awful orthodontist appointments!

5. Lock your diary. Soon everyone will know you’re in love with Lee Sale, even Lee Sale. Crushes are good, but you might want to keep them to yourself. Not everyone is as good as keeping secrets as you think they are.

6. Yeah, Lee Sale is cute. But it’s never gonna happen, girlfriend. Even though you’ll have boyfriends in the very-near future (all as cute as Lee Sale), maybe it would be better if you didn’t focus on them so much. You know, pay attention to yourself a bit more. Boys are great, but at the end of the day, you’re the person you really have to have a relationship with.

7. Keep writing stories. Someday that passion will pay off.

8. Your hair. I know. It’s so big it needs its own zip code. But guess what?! In about 5 years or so big hair will be in! Isn’t that awesome?! Your friends will spend their allowance on hair spray and perms and you will just wake up and look that way! Best. Decade. Ever. But alas, that decade will end and flat, straight hair will once again be back in style. That’s okay, because soon enough they will invent flat irons and Brazilian blowouts. Just sit tight.

Middle school is tough. You’re confused. You’re lonely. And sometimes you don’t know where you belong. But look around. Every single one of the kids you’re surrounded by feels the exact same way… some are just better at faking it.

You’ve got this. You will (eventually) grow into a happy, well-adjusted adult. Believe in yourself, because I believe in you. 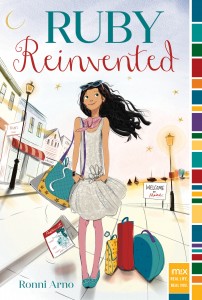 When twelve-year-old Ruby learns that her supposed BFFs are only friends with her because her of her famous parents, she finds a place as far from fake and phony Hollywood as she can get: a Maine boarding school.

In her panic to distance herself from her star-studded folks, Ruby tells her new friends that she’s an orphan. She feels awful lying to her weird but wonderful roommate Summer (the first real friend Ruby has ever had), but not awful enough. In fact, now that nobody’s comparing her to her perfect parents, Ruby can finally let her own talents as a dress designer take center stage.

But when Ruby finds herself connecting with a boy who really did lose his parents, she’s torn between who she is and who she’s pretending to be. And with Parent’s Weekend approaching, she must find a way to keep her secret… without losing her new best friend, the trust of her first crush, and the chance to shine as the designer of her own fashion show.

Find Ruby Reinvented on Indiebound, Amazon, Barnes & Noble, and Simon & Schuster, or ask for at at bookstores and libraries near you.