The Mushy Stuff: Love and Friendship in Middle Grade Fiction

Love is in the air! In homes and classrooms across the country—and beyond—paper hearts are being cut and pasted, cookies are being baked, parents are rushing to the store because they forgot to buy soy-free, gluten-free, dye-free hypoallergenic, candy for this afternoon’s class party, glitter is everywhere. EVERYWHERE.

Whether you are celebrating romance or friendship, I have just the book for you. Here are a few, available now and upcoming, on my list: 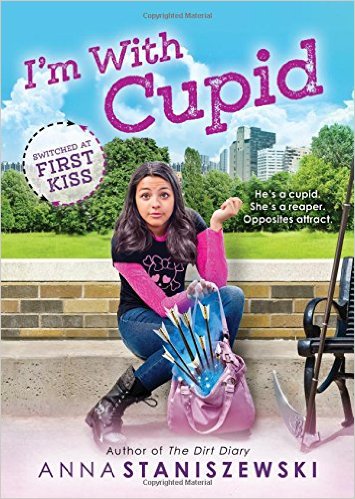 Marcus is a Cupid. Lena is a Reaper. Opposites attract in the exciting new Switched At First Kiss series by the acclaimed author of The Dirt Diary.

When she’s dared to kiss the adorkable Marcus Torelli at a party, Lena thinks it’s the perfect opportunity to cross First Kiss off her list of “Things to Accomplish Before I Turn Fourteen.”

It’s only when she gets sent on an assignment the next day that she realizes something went horribly wrong. That ZING she felt wasn’t the thrill of her first kiss–she and Marcus have swapped powers! Lena is not your average eighth grader; she’s a soul collector with a serious job to do. And Marcus turns out to be a supernatural matchmaker (like Cupid, but without the diaper).

Now logical Lena finds herself with the love touch, and sweet, sentimental Marcus has death at his fingertips. The truth is that Lena should never have taken that dare…because one little kiss has Lena and Marcus in a whole lotta trouble. 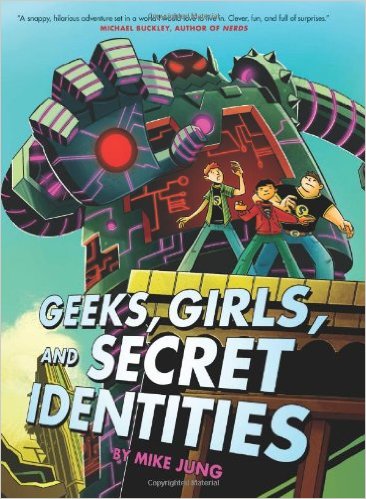 Captain Stupendous’s powers were recently transferred to Polly in a fluke accident, and so while she has all of his super strength and super speed, she doesn’t know how to use them, and she definitely doesn’t know all the strengths and weaknesses of his many nemeses. But Vincent and his friends are just the right fan club to train up their favorite superhero before he (she?) has to face Professor Mayhem again. And if they make it through this battle for the safety of Copperplate City, Vincent might just get up the courage to ask Polly on a date. 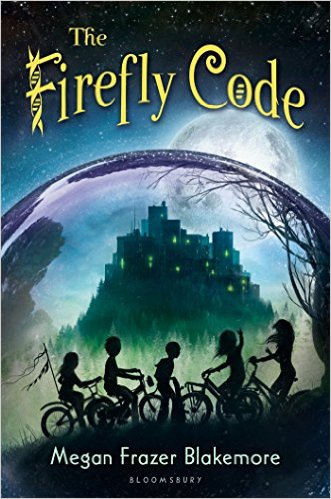 THE FIREFLY CODE by Megan Frazer Blakemore (Bloomsbury, coming in May)

Mori and her friends live a normal life on Firefly Lane in their utopian community, Old Harmonie. In a world this safe and perfect, they’ve never had to question anything . . . never had to wonder about how their lives came to be. Until a new girl named Ilana moves in. She’s so perfect that Mori and her friends are curious . . . Where exactly did Ilana come from, and why does she act so strange sometimes? When Ilana’s secret is revealed, the kids on Firefly Lane must decide: is it finally time to start questioning the only world they’ve ever known?

In a stunningly imaginative story, critically acclaimed author Megan Frazer Blakemore takes readers on a journey with f
ive friends–new and old–that will have everyone talking about not just what makes people human, but what makes them true friends. 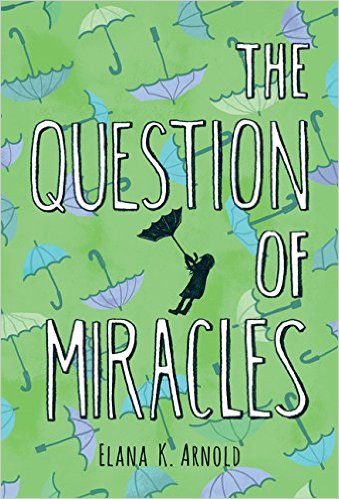 THE QUESTION OF MIRACLES by Elana K. Arnold (HMH Books for Young Readers)

Sixth-grader Iris Abernathy hates life in Corvallis, Oregon, where her family just moved. It’s always raining, and everything is so wet. Besides, nothing has felt right since Iris’s best friend, Sarah, died.
When Iris meets Boris, an awkward mouth-breather with a know-it-all personality, she’s not looking to make a new friend, but it beats eating lunch alone. Then she learns that Boris’s very existence is a medical mystery, maybe even a miracle, and Iris starts to wonder why some people get miracles and others don’t. And if one miracle is possible, can another one be too? Can she possibly communicate with Sarah again? 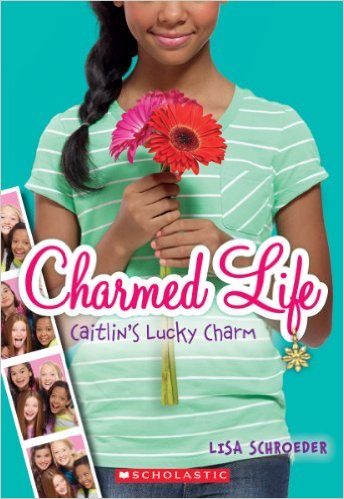 Caitlin would stay at summer camp forever if she could. Her new best friends in the world, Hannah, Mia, and Libby are there. And at home? Everything’s different: Her dad is worried he might be losing his job; her mom is repainting the whole house and making the kids volunteer at a soup kitchen; and Caitlin is starting sixth grade at a new school, where none of the girls are as fun or friendly as her Cabin 7 BFFs. But Caitlin has a good-luck charm — or a good-luck charm bracelet anyway. The Cabin 7 girls bought it together, and Caitlin is taking the first turn wearing it. She’s sure it will help turn her luck around . . . but when? 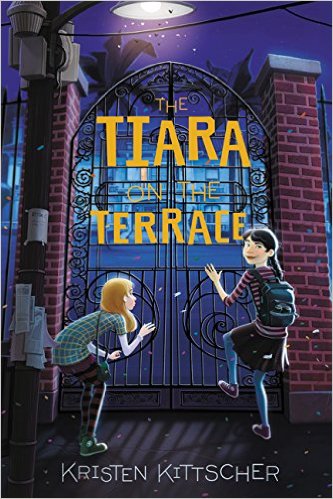 In this funny, clever novel, perfect for fans of Pseudonymous Bosch and Gordon Korman and a companion to The Wig in the Window, tween sleuths Sophie Young and Grace Yang go undercover at Luna Vista’s Winter Sun Festival to catch a murderer before he—or she—strikes again.

Sophie Young and Grace Yang have been taking it easy ever since they solved the biggest crime Luna Vista had ever seen. But things might get interesting again now that everyone is gearing up for the 125th annual Winter Sun Festival—a town tradition that involves floats, a parade, and a Royal Court made up of local high school girls.

When Festival president Jim Steptoe turns up dead on the first day of parade preparations, the police blame a malfunctioning giant s’more feature on the campfire-themed float. But the two sleuths are convinced the mysterious death wasn’t an accident.

Young and Yang must trade their high tops for high heels and infiltrate the Royal Court to solve the case. But if they fail, they might just be the next victims. 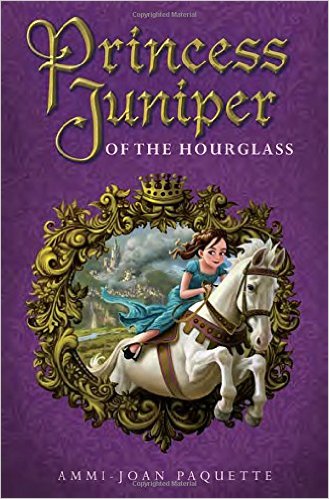 PRINCESS JUNIPER OF THE HOURGLASS (Philomel, 2015)

For her thirteenth nameday all Princess Juniper wants is a country of her own. So when rumblings of unrest start in his kingdom, Juniper’s father decides to grant his daughter’s wish and sends her to a small, idyllic corner of the Hourglass Mountains until trouble blows over. Once there, Juniper discovers that ruling a small country–even just for the summer–is a bit harder than she’d expected, especially when cousin Cyril challenges her rule. Still, the most difficult part is to come. Juniper and her friends discover that her father’s kingdom is at war. The only way to stay safe is to remain in the Hourglass Mountains much longer than planned. Juniper may have her own country after all . . . but what will that mean for the kingdom of Torr? 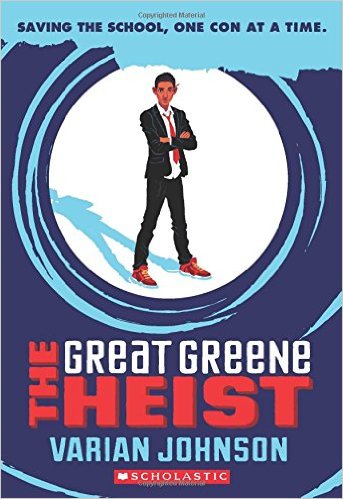 A heist series may not sound very Valentiney, but this one delivers action and awkward crushes.

Jackson Greene swears he’s given up scheming. Then school bully Keith Sinclair announces he’s running for Student Council president, against Jackson’s former friend Gaby de la Cruz. Gaby wants Jackson to stay out of it — but he knows Keith has “connections” to the principal, which could win him the presidency no matter the vote count.

So Jackson assembles a crack team: Hashemi Larijani, tech genius. Victor Cho, bankroll. Megan Feldman, science goddess. Charlie de la Cruz, reporter. Together they devise a plan that will take down Keith, win Gaby’s respect, and make sure the election is done right. If they can pull it off, it will be remembered as the school’s greatest con ever — one worthy of the name THE GREAT GREENE HEIST.