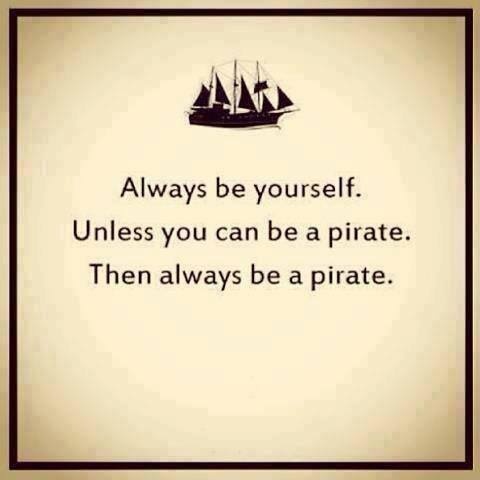 Need some piratey things to say? I’ve got you covered!

Aboveboard You didn’t know that was a pirate phrase? It is! When a pirate ship was sneaking up on a merchant vessel, the pirates would hide “below board” or below deck. If everyone was above board, all was honest and fair. I don’t mind if you eat the last ice cream bar as long as you don’t sneak it. Be honest and aboveboard and we’ll be fine. Just kidding, if you eat the last ice cream, I will gut you.


Bilge (Also: Bilge water, bilge rat) The bilge was the lowest part of a ship. It was filthy, disgusting, and filled with stagnant water and rats. The bad news: In a flat bottomed ship it was difficult to pump the stinking bilge-water out. The good news: Bilge rats were a good source of fresh meat at sea. I’d sooner drink bilge water than this rot-gut grog but go ahead and pour me another glass.

Galleypepper Soot, ashes, and other bits of debris that found its way from the cook’s fire into the food. These cackle farts are rather bland. If only they had a bit more galleypepper.

Holy Mackerel Another surprising term. Mackerel was caught in large quantities, but went bad quickly. Therefore, in the 17th century, it was the only fish allowed to be sold on the Sabbath. Holy Mackerel! This fish has gone bad!

Kiss the Wooden Lady A minor pirate punishment where a sailor was forced to stand, facing the mast, with his hands tied around it. Other sailors were encouraged to kick him in the hind-quarters as they passed by. If you don’t stop picking on your sister, I’ll make you kiss the wooden lady, young man!

Shiver Me Timbers I was recently asked about the meaning of this one on twitter and was happy to give a definition. Ships were made of wood. Large waves or cannon fire could cause the timbers to vibrate, shudder, pitch, or shiver. Used as an exclamation of surprise. Shiver me timbers! Did pirates really call eggs “cackle farts?” That’s…gross.

Shake a Cloth in the Wind To be just a little bit drunk. Shiver me timbers! Black-Hearted Jim shook a cloth in the the wind this afternoon. He covered all the holy mackerel and cackle farts with extra galleypepper and kissed the wooden lady–on purpose! That is not aboveboard behavior! Let’s put him in the bilge until he’s sober.

There ye have it, a few words to get you conversating like one o’ the dark brotherhood today. If you be still stuck for somethin’ t’ say, try out this English t’ pirate translator. Have fun. Celebrate. But keep yer filthy hands off me ice cream bars. I mean what I say about the gutting. Aaargh!

Note: I learned a lot of these words from The Pirate Dictionary by Terry Breverton. If you want to learn more, I recommend it.