Hey Kid! with Krista Van Dolzer (THE SOUND OF LIFE AND EVERYTHING) 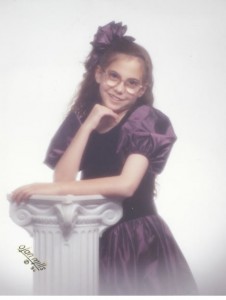 You don’t know me, but I know you. I was you not long ago. Well, you probably think it’s been a while, but I can still remember what it was like to be ten years old. I’ve always been inside our head.

You like to play with your friend Brooke. In the summer, you put doll clothes on water balloons and play house out on the lawn, and in the winter, you turn Brooke’s basement into an obstacle course. But you also like to retreat to your own basement, where a blocky gray computer sits, waiting for you to fill its memory with stories.

As you get older, you’re going to retreat to that computer more often. Luckily, you’ll have good friends who won’t get upset when you tell them you’d rather stay in. Despite this love of staying in, you think you’re an extrovert, and you play one pretty well. You like to speak in church and be the center of attention. Someday, you’ll fake an English accent and entertain several dozen of your peers while you wait in line in a narrow, crowded hall. But after you’ve had a few kids, you’ll read this great book, Susan Cain’s QUIET (write that down!), and discover that you’re actually an introvert—and that that’s okay. Being introverted doesn’t make you lesser. You just grew up in a culture that values extroversion (which is probably why you’ve convinced yourself you are).

What else can I tell you about thirty-one-year-old Krista? You like grapefruit and green beans now. And oh my gosh, you ate tilapia for the first time a few weeks ago and actually liked it. (You still don’t like salmon, though.) You have an awesome husband, three great kids, and two books coming out this year. In other words, you have pretty much everything you’ve ever wanted, but you still have your rough days.

It’s not because you’re stupid or ungrateful. It’s because the chemicals in your brain don’t always work the way they should, and you know what? That’s not your fault. It’s doesn’t always feel that way, but it’s true. Luckily, you’ll have a supportive family and learn a lot about yourself and the people around you (who you used to judge more harshly). You’ll especially like this quote from Orson F. Whitney:

“No pain that we suffer, no trial that we experience is wasted. It ministers to our education, to the development of such qualities as patience, faith, fortitude, and humility. All that we suffer and all that we endure, especially when we endure it patiently, builds up our characters, purifies our hearts, expands our souls, and makes us more tender and charitable, more worthy to be called the children of God…and it is through sorrow and suffering, toil and tribulation, that we gain the education that we come here to acquire.”

Now, that doesn’t mean you won’t compare yourself to others. I hate to break it to you, but you’re pretty good at that. You know what will help? Making friends with other people who are in a similar boat. It’s much easier for you to feel genuinely happy or sad for others when you’ve already established a relationship with them. Oh, and don’t forget to give more than you take. That will just make you feel like an all-around good person.

Keep at it, ten-year-old Krista. You’re standing on the threshold of a beautiful life. 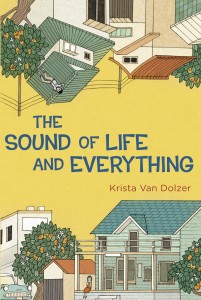 Twelve-year-old Ella Mae Higbee is a sensible girl. She eats her vegetables and wants to be just like Sergeant Friday, her favorite character on Dragnet. So when her auntie Mildred starts spouting nonsense about a scientist who can bring her cousin Robby back to life, Ella Mae doesn’t believe her–until a boy steps out of the scientist’s pod and drips slime on the floor right before her eyes.

But the boy is not Robby–he’s Japanese. And in California in the wake of World War II, the Japanese are still feared and mistreated. When Auntie Mildred refuses to take responsibility, Ella Mae convinces her mama to take the boy home with them. It’s clear that he’ll be kept like a prisoner in that lab, and she wants to help.

Determined to do what’s right by her new friend, Ella Mae teaches him English and defends him from the reverend’s talk of H-E-double-toothpicks. But when the boy’s painful memories resurface, Ella Mae learns some surprising truths about her own family and, more importantly, what it means to love.

The Sound of Life and Everything is available on IndieBound, Powell’s, B&N, and Amazon, or ask for it in bookstores and libraries near you.